When it comes to changing the minds of would-be intruders, nothing works as well as getting your hands on the best outdoor smart lights that are out there. Security systems protect your home from break-ins, but a smart outdoor light behaves as a layer of preemptive security. These will change the mind of most prowlers and spare you the jarring experience of waking to the alarms of broken windows or jimmied doors.

If there’s a question of whether or not there’s someone at the light switch, a smart perpetrator would turn tail rather than take the gamble. This is the whole point behind the smart light.

A normal outdoor light works well to illuminate your yard, driveway, backyard, or doorstep. But if a criminal who is thinking of breaking in can see that the light is on statically, he might avoid it and seek a different way in. No shock value, no scurrying, no surprises, and little deterrence.

A traditional outdoor light might keep people away from entry points immediately surrounding that area. Still, it won’t deter them from trying in other areas. Let’s face it; people have become immune to sensor lights- they’re everywhere.

With a smart light, you have a whole list of things you can do, depending on the capabilities of the light. It can turn on sensors that detect movement, set off alarms, take pictures, or begin recording video. Depending on the type you get, you can interact with a trespasser from anywhere in the world through a smart floodlight.

You can make them think you’re inside waiting for them & have already called the police. Or you can just let the sirens cut through the quiet night air and scare them off.

These lights are also a good way to find out what kind of intruders you might be having that are not human. With a unit equipped with a camera, you can find out what’s getting into your trash, or taking veggies out of your garden. Many people wind up shocked at the kind of wildlife traversing through their yard in the cover of night.

As mentioned above, a smart exterior light adds a layer of defense over your in-home defenses. This is important to stop trouble from coming too close to your home, decreasing dangers that might come to you or your family, and your property.

Also, a smart outdoor light covers areas that remain vulnerable outdoors. Your vehicles, shed, barns, or other outbuildings, will all benefit by the eyes of a floodlight, when your home security system won’t reach.

Like anything else that’s labeled as “smart,” the outdoor lighting industry has meshed together with technology, increasing function and usability. Though many different types of smart lights boast a variety of fun features, not many include furthering the security of the home outside of brightening up the yard.

The following are three different smart lights that are geared toward securing the outdoors. These three all have cameras equipped and are app accessible on any device. After we have a look at all three, we’ll then decide which rises above the others by looking at what you get for the money. 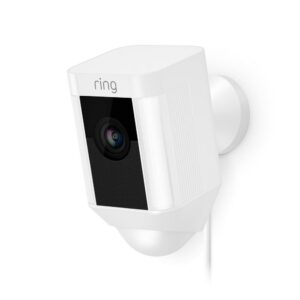 This unit has two strengths that the other two smart lights don’t. It’s size and mobility. The Ring Spotlight Cam Battery doesn’t require any wiring at all, and you’re only limited by your Wi-Fi signal strength as it relates to locating and mounting the light. Not having to be concerned with any wiring makes this device a snap for the Do-It-Yourselfer.

Because it’s relatively small, it can be located in positions that potential intruders wouldn’t expect. Also, it can be situated to avoid normal traffic, reducing false alarms and alerts to your mobile device.

These two characteristics, along with all of the other features involved with the Ring Spotlight Cam Battery, make this a useful and versatile inclusion to your home security system.

One of the same characteristics that make this unit unique, and were just praised as a positive, also falls on the cons side of things- its size. Because it’s a compact design as an outdoor light, the lights aren’t as powerful as the other two.

Where the others would flood an open area with light, this unit might serve better where closer quarters are involved. The camera is more of the focal point in this unit, but will have problems trying to record or live stream in full-color HD at night compared to the others.

Yes, there is night vision that can remedy this as far as the camera is concerned. Still, infra-red recordings or pictures can be more difficult to identify someone than a full-color HD image. (This isn’t to say that the night vision couldn’t serve better doing several different tasks.) 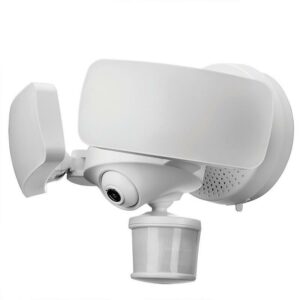 The most prominent feature at first glance of the Maximus is the curved dual lighting setup. The design helps to spread light more evenly across the field of view, making the most out of the unit’s 2400 lumen bulbs.

The Maximus has a few features that the others don’t that should be noted. The instant 911 call feature is a great idea if you choose to use it for times that you’re away and are not near your device.

Another great feature is the option for a pre-recorded message to sound off when the light sensors have been triggered. The sensors are powerful, reaching across the yard over 70 feet. One could make the argument that nobody would be identifiable at that distance on the camera. That said, nothing is saying that you have to have it set so far out, though it isn’t difficult to come up with reasons to do so anyhow.

Like all of the traditional lighting systems, this unit is hardwired. You can replace an existing outdoor light- making use of the junction box, or run a wire to where you desire to place it.

Another con is that it doesn’t have any night vision capabilities. Now, from one point of view, the argument can be made that if you have two good sized lights illuminating your zone, why would you need night vision? The picture on the camera would be hi-def and decently lit to see anything you’d like to see.

But sometimes, when you have features that you don’t think you’ll use, you wind up finding reasons to use them. Night vision can be useful, fun, and opens up more strategic ways of catching someone in the act of doing something they shouldn’t. 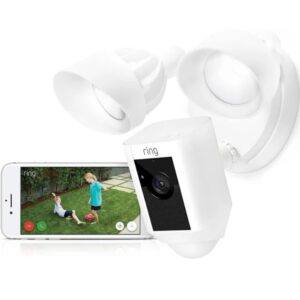 With Ring’s Outdoor Wi-Fi Cam With Motion Activated Floodlight, you get all of the goodies that you get with the first unit, the Spotlight Cam Battery, and then some. But where the smaller counterpart is lacking this unit excels. Rather than two small lights lining the housing like the Battery unit, this has two more traditional looking floodlights.

Because this smart light has a brighter light capacity (two 1500 lumens LEDs), the camera can take better shots at greater distances. Also, the adjustable lights can be placed in a manner that best suits the contour of the space.

Another bonus that should be recognized is the customizable motion zones. The ability to create different activity zones reduce the chances of false alarms remove need to worry about bushes moving around in the wind, or traffic going by.

Just like the Kuna Maximus, this unit is hardwired. Again, without an existing floodlight to replace, you’ll have to run a wire to power the smart light. Not being battery powered, you’re stuck with wherever you can place it- and keep it there.

Another con would be that the base plate doesn’t mount properly with some existing electrical boxes. This isn’t a common complaint, but it has come up a time or two.

What is the Conclusion?

This is the most frustrating comparative review to date. Why? Because all three contestants take the lead in their strengths, and not one smart light from the three outshines the others (pun intended).

The three smart lights in question all have their strengths and weaknesses. No matter what the verdict is as it relates to being the best of the three, your needs should trump anything said here. If your requirements dictate that one is better than the other, go with it!

In the past, we’ve taken a look at different groups of products, and pricing was one factor that contributed to a final decision of which is best of the group. Often in a group of items similarly priced, you find some that are less of a product at the same cost as other (better) items. Surprisingly, this isn’t the case between these three.

As far as pricing goes, all three appear to be adequately priced in relation to their capabilities. They vary some from one another in price, but it seems to be a justifiable give and take.

As far as the features go, the Ring Outdoor Wi-Fi Cam With Motion Activated Floodlight takes the lead. Let’s be honest. This could have been more of a race between two different smart lights (Ring Outdoor Floodlight vs Kuna Maximus) when it boils down to the feature’s category.

The reason being is that the two are very similar in many ways, and the Ring Battery Operated unit is clearly meant for closer quarters operation. For example, the Ring Spotlight Cam Battery would be great to light up and defend a porch or deck, and the other two would be better for the yard and driveway.

Between the Maximus and the Ring Outdoor, The Ring gets the trophy in the feature’s category. The largest reason also happens to be among the few differences between the two units- Infra-Red Night Vision. That is what pulls Ring ahead in this category.

The Maximus had a few features that the others didn’t have, but not enough to compensate for what it didn’t have.

This is where things get sticky. The smaller battery-operated smart light takes the lead in smaller or more focused areas. The Maximus takes the lead over the other two due to its bright and curved bulbs, providing even light dispersion. But out of the three, the Ring has the best motion zone customization.

The Ring Outdoor Wi-Fi Cam With Motion Activated Floodlight is the pick over the other two. The features, the price, and the functionality seem to check more boxes than the others.

As stated above, this was a tough comparison. Any of these would serve you well depending on what you’re looking your smart light to do, and where you intend to mount it. 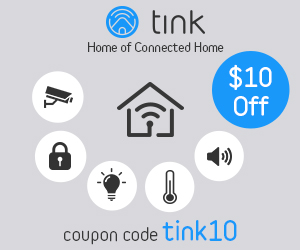